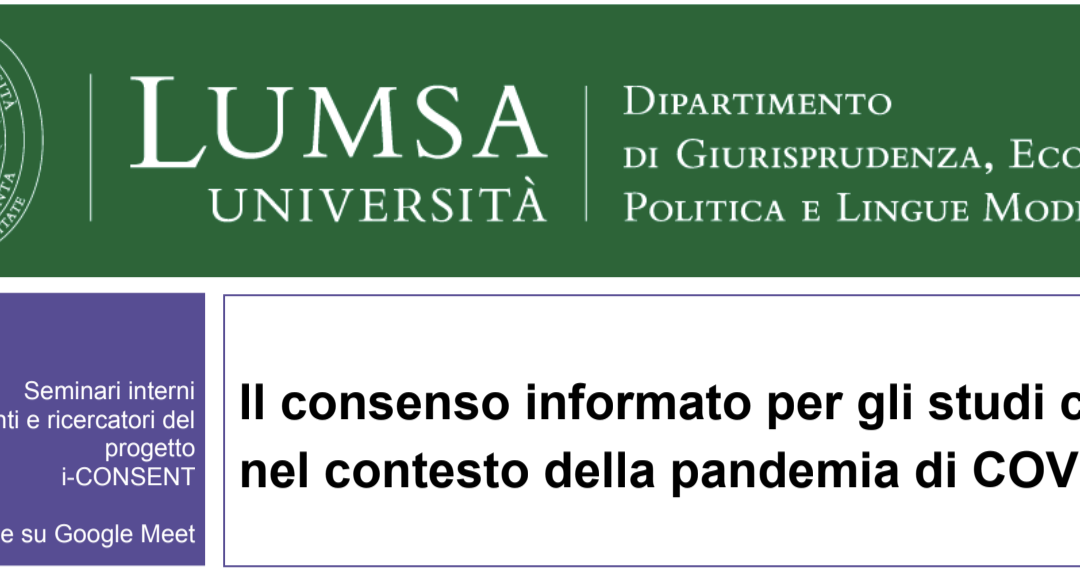 Our partner LUMSA University organised Monday, March 1st 2021 a meeting to further discuss the different emerging ethical problems and implications that COVID-19 has for informed consent. This time, the team invited Prof. M. Toraldo Di Francia to discuss the challenges posed by biological samples (also with reference to genomic investigations) .

During her talk, she touched upon a number of important arguments.

First of all she talked about the legal status of biological samples, which has been problematic since the inception of the possibility for their storage. One of the central issues that has been discussed is the identity is biological as well as relational. Should donation then be permitted light-heartedly? Given that each biological sample is also related to our relationships (family, ethnic group, etc.) this is problematic and makes the notion of informed consent strongly connected to the concept of relational autonomy.

Another delicate issue is whether or not we should have a right not to know. Once more, the response to such a question is related to the interpretation we give to autonomy.

The first and third options allow for the right not to know, while the second does not.

What about incidental findings? Privacy could be enlarged also to the psychological dimension of the subject, hence allowing for not interference in the mind of the subject. Of course, this puts a lot of discretional power in the hands of doctors, researchers, etc.

Another compelling question is if there is a moral duty to have genetic tests if they can be useful to someone else (i.e. family members). It is not advisable to tests minors for monogenetic illnesses -especially if there is no cure. However, it seems reasonable to store the sample in the possibility of getting screened once over 18 (or if a cure arises).

The tension between science and research and the need of many to get results as soon as possible and the awareness of the economical dimension of the biological sample is something that is never simple to deal with. That is why we need to remain vigilant in a crisis such as the COVID-19 we are living, without losing sight of the biovalue of these sample -that makes them a potential commodity for profit.

There are many exceptions to the rules and the actual control over these samples seems impossible.

Making those anonymous? In theory it works, but the truth is that the identification is possible -hence making the right to privacy empty. Ultimately, a misuse of data could not only lead to discrimination but also stigmatization, so attention should abound.

The conclusions of this meeting have been included on the i-CONSENT Guidelines as fact sheets. Soon available on this website.